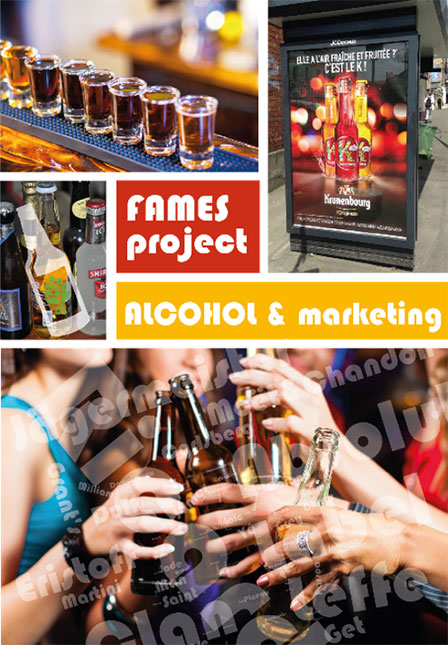 Aesthetic, funny, surprising, offbeat, tantalising ... Advertising "marks" us ... Or not? What ideas do teens get from advertisements for alcoholic beverages?

More generally, how do they perceive marketing strategies promoting alcohol brands? Are they sensitive to them and where do they feel exposed most often?

In France, alcohol remains the most widespread psychoactive substance in adolescence, with, at 17 years of age, nearly one in ten teenagers (8.4%) who claims a frequent use of alcohol, i.e. at least 10 times a month (Spilka et al., 2018). While there is an international scientific consensus on the relation between exposure to alcohol advertising and adolescent drinking behaviour (Anderson et al., 2009 ; Jernigan et al., 2016), very little research has been developed in France on how adolescents are stimulated by alcohol marketing.

The OFDT therefore engaged in 2015 the FAMES (French Alcohol Marketing Exposure Scale) research program, in partnership with the Host Team for Healthcare Organisation management (EA 7348 MOS) of the School of Public Health (École des Hautes Etudes en santé publique, EHESP) from a dual perspective:
•    To better describe young people's exposure to alcohol marketing and its consequences, first by developing a scale  for measuring alcohol exposure through a set of questions that can be used in statistical surveys targeted at the adolescent population;
•    To better understand the existing marketing strategies, in particular those deployed in France which, since 1991 with the “Evin” law, has built a strong legal arsenal, original at the international level, to control alcohol advertising.

In view of the first objective, a module of indicators also entitled FAMES was created for use in general population surveys. It consists of two parts: (1) a focus on the latest memorised alcohol advertising and related perceptions on it, and (2) an insight in the frequency of alcohol marketing exposure in different contexts during the year preceding the survey (see box). The last group of indicators was adapted from an earlier European study (AMPHORA, Alcohol Measures for Public Health Research Alliance), to the French context and issues.

First results were collected in the framework of the 2015 ESPAD survey (within a module specific to France) and published in 2017 (Gallopel-Morvan et al., 2017). In 2017, the scale was revised and then included in the 2017 ESCAPAD national survey targeting French adolescents at the age of 17 (Mutatayi et Spilka, 2019). 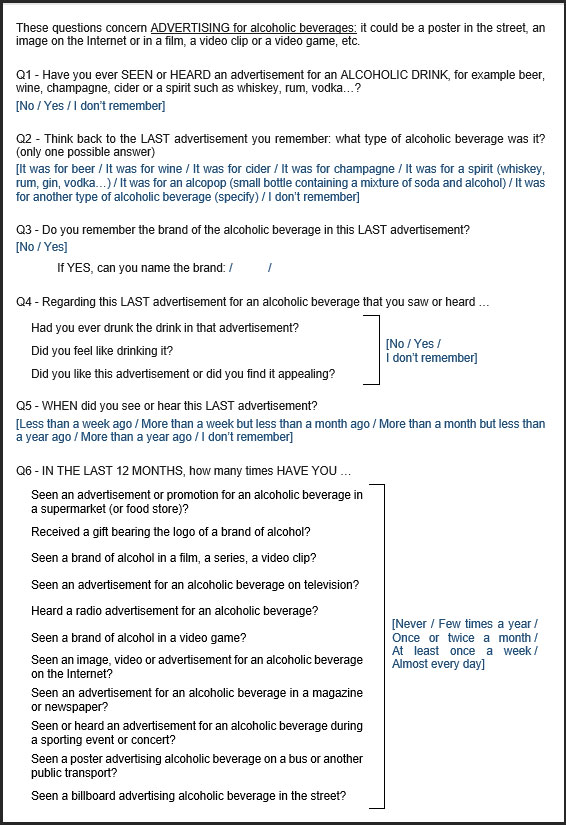 As part of the FAMES project and with the financial support of the National Cancer Institute (INCa), the OFDT also carried out, from 2017 to 2019, a study on the marketing methods deployed within four environments familiar or popular to young people: mass retail (convenience stores and super/hypermarkets), music festivals and large sports venues and their surroundings (during national or international competitions in 2018). This study was based on direct observations as well as one-on-one or group interviews with young people aged between 14 and 25. The main results are presented in the form of a poster.

For more information on the FAMES project, please write to: projet.FAMES@ofdt.fr