Gambling is defined as “any operation offered to the public, under any name, in order to raise the expectation of a win which is due, even partially, to chance and for which a financial sacrifice is required from participants”. The following gambling activities are currently available in France:

All these types of games are legally available to the general public through physical retail outlets and/or online (except for slot machines and casino games). They are regulated under the gambling regulations. Other similar types of games are practised but are not regulated. This includes betting on e-sports competitions (computer game competitions such as League of Legends or Super Smash Bros).

Other games may be played with stakes and winnings (not permitted by law), involving at least some chance: card games, board games, strategy games, games of skill (such as billiards, darts, pétanque, etc.).

In addition, certain highly speculative financial bets (Forex and binary options, i.e. with only two outcomes) can be considered as gambling. It involves betting on the rise or fall of a financial asset or currency over a very short period of time. This type of speculation remains marginal today in France

An old and significant economic sector

Initially banned by the royal state and taking place in secret for a long time, gambling was legalised in France at the end of the 18th century with the creation of the Royal Lottery. Casinos appeared in the 19th century (decree of 1806), followed in the 20th century by the PMU (Pari mutuel urbain, in 1931) and the National Lottery (in 1933). These three gambling operators still share the largest share of the French gambling sector.

The PMU has a monopoly to market horse betting (excluding racecourses) via its network of sales outlets throughout France (more than 13 200 sales outlets in 2021). Similarly, Française des Jeux (FDJ) fulfils a similar role, marketing draw/scratch games and sports betting at its points of sale (around 30 000 in 2021). The 202 casino establishments complement this physical offer by selling table games and slot machines. This physical gambling offer is complemented by an Internet offer for which, since 2010, France has set up a new licensing regime for private operators in a limited gambling sector: sports betting, horse betting and ring games. Only online lottery games remain under the monopoly of FDJ.

The regulated online gambling offer is limited to the following sectors: lottery games (draw or scratch), sports betting, horse betting and ring games (poker). While it was possible to engage in sports and horse betting on the Internet via FDJ and PMU’s commercial offer, the law of 12 May 2010 allowed new players to enter a sector of activity that had previously been a monopoly. With the controlled opening up to competition in three segments (sports betting, horse betting and ring games), France has seen the arrival of new operators on its market. At the end of 2021, 15 operators shared 27 licences.

The financial impacts of gambling

The gambling industry provides tens of thousands of direct and indirect jobs and in 2021 had a turnover of almost €10.7 billion. Spending on gambling has continued to grow and accounts for almost 11.7% of leisure and culture spending (up from 8.9% in 2008). At present, the net expenditure per major inhabitant is a little more than €200 (compared to €169 in 2008).

In France, taxation of gambling is based on bets (except for casinos), with each activity being subject to specific levies. The reform outlined by the PACTE law (action plan for the growth and transformation of companies) in 2019 also entails a partial overhaul of gambling-related taxation: for online sports betting, the tax base initially based on the volume of bets was shifted to the operators’ gross gambling revenue as of 1 January 2020.

Draw games, scratch cards or instant games are the first category of games played in the past year during adolescence (31%). Next come sports betting and forecasts, reported by 17% of adolescents, followed by “casino games”, reported by 3.6% of gamblers. Regardless of the type of game, boys are more likely to be gamblers. The share of young people playing on the internet remains a minority, rising from 14% in 2011 to 17% in 2017.

In 2017, 1.6% of 17-year-olds who gambled at least once in the past year were at high risk of problem gambling, according to the Canadian Problem Gambling Index (CPGI), again with a clear male overrepresentation. The prevalence of potentially risky excessive gambling behaviour in the 17-year-old adolescent population is estimated at 0.6%.

According to the 2019 Santé Publique France Health Barometer data, 47.2% of 18-75-year-olds took part in gambling in the past year. Lottery games (draw or scratch cards) were the most frequently reported (43.3% of 18–75-year-olds), followed by sports or horse betting (5.2% and 3.7% of 18-75-year-olds respectively), casino games and poker. The traditional gaming media (FDJ or PMU sales outlets, casinos) remain dominant even though the share of gambling conducted on the Internet is constantly increasing. In 2019, online gambling accounted for 16.1% of all players.
This activity is relatively more common among adults of working age, between 25 and 64-year-olds, in intermediate occupations more than in managerial and professional occupations.
Of those who reported that they had gambled in the past year, 4.4% can be classified by the Canadian Problem Gambling Index as moderate risk gamblers and 1.6% as problem gamblers. As a proportion of the total population aged 18-75, this would represent about 1 million people on the one hand and 370 000 on the other.

A health and social impact still poorly described in France

The state of knowledge on the health impact, and about social and individual costs of problem gambling is still fragmented. While the economic benefits of the gambling industry and its employment benefits are well known, it is difficult to measure the proportion of gamblers who experience difficulties related to their gambling. Yet the impact on individuals and their families can be considerable. The financial consequences, which can go as far as overindebtedness or bankruptcy, are the most direct. However, the difficulties can also be relational and familial (separations, isolation, etc.), professional (loss of job, etc.), psychological (depression, anxiety, etc.) and even physical (symptoms linked to the related use of alcohol or other psychoactive products, malnutrition, suicide, etc.). 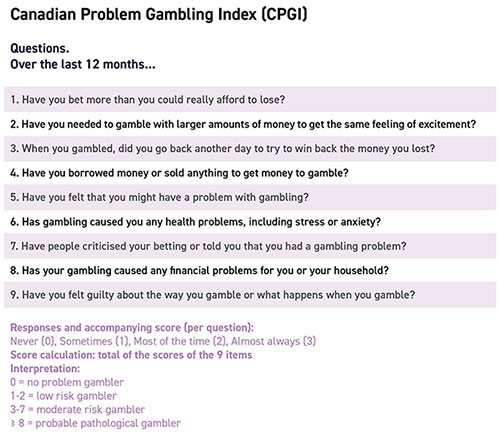 Over the last decade (2010-2020), the regulatory environment for gambling changed dramatically.
In 2010, France adopted a new legal and regulatory framework to regulate the online gambling sector (Law of 12 May 2010) by introducing a controlled opening up to competition of the online betting market (sports betting, horse betting and ring games), putting an end to FDJ and the PMU’s State monopoly. This law entrusts the regulation of the online gambling market to an independent administrative authority, the Online Gambling Regulatory Authority (ARJEL).

In 2019, on the occasion of the PACTE law of 22 May 2019 (law no. 2019-486) relating to the growth and transformation of companies, which provides in particular for the privatisation of FDJ, the regulation of the gambling sector has been reformed and entrusted to the French Gambling Authority (ANJ), which is the successor to the Online Gambling Regulatory Authority (ARJEL) with a broader scope and reinforced powers.

In order to contribute to the achievement of the objectives of the State’s gambling policy, a Monitoring Centre for Gambling (ODJ) was created in 2011 (decree of 9 March 2011). As of 1 July 2020, pursuant to decree no. 2020-494 of 28 April 2020 on the conditions for making the gambling supply and gambling data available, the OFDT has taken over the ODJ’s missions relating to the conducting of scientific studies on gambling and addiction to these games (Art. 3 of the law of 12 May 2010 modified by the ordinance of 2 October 2019 reforming the regulation of gambling). Within this framework, the OFDT contributes to documenting the actions and public policies of its members (Mildeca, Health, Interior, Agriculture, Budget, Sports) as well as those of the ANJ.