Tobacco is a plant whose leaves, after drying, are fermented to obtain a specific taste. It is offered for use in the form of cigarettes, cigars and loose tobacco, as well as tobacco for rolling, for pipes, and for chewing.
Tobacco contains nicotine, which has a “stimulating”, anxiolytic and appetite suppressant effect. Tobacco products are composed of additives (flavour and texture agents). The combustion of the tobacco leaf creates new components (carbon monoxide, tars, etc.) that are harmful to health. Although several thousand substances have been identified in tobacco smoke, only about ten of them have physiologically active doses: nicotine, carbon monoxide, nitrogen oxides, tars, etc. 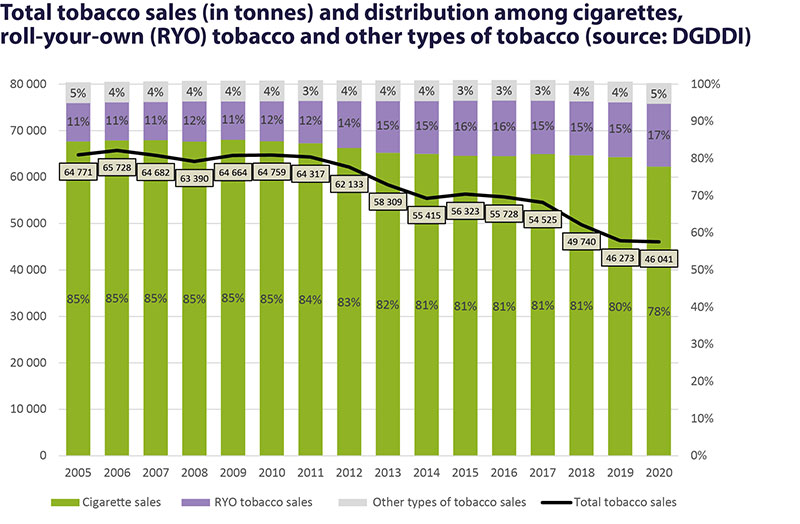 Supply within the tobacconist network

Over the past 15 years, total tobacco sales in France have been declining, from 64 771 tonnes in 2005 to 43 188 tonnes in 2021. Successive price increases are the main reason for this, in a general context of smoking prevention (information campaigns, health warnings on cigarette packets, standardised plain packets, ban on sales to minors, etc.) and the “denormalisation” of tobacco.

Supply outside the tobacconist's network 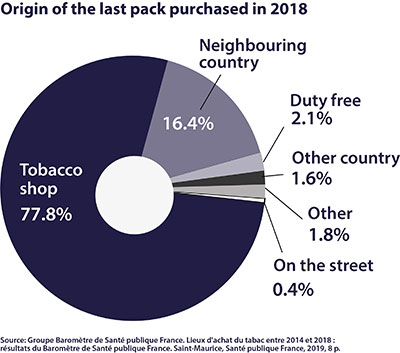 It is currently estimated that one in five cigarettes smoked in France is purchased in a neighbouring foreign country. These cross-border purchases are motivated by the difference with French prices. This trend has been confirmed by the observation of the decline in volumes by department, which was 10.4% in border departments and 5.8% in non-border departments in 2021.

Legal purchases (both domestic - in the tobacconist's network - and non-domestic - abroad and duty free) remain the most common mode of supply, especially for cigarettes. The proportion of street shopping does not appear to have increased significantly in recent years when asked about the place of last purchase in shopping behaviour surveys (0.1% in 2014, 0.5% in 2017 and 0.4% in 2018).

In the adolescent population

In 2018, lifetime cigarette use concerned just over one in five middle school pupils (21.2%), with a sharp increase between levels, from 7.6% in the sixth grade to 37.5% in the ninth grade (14-15-year-olds or year 10 in secondary school in the UK), levels that are clearly down from 2014. This decline was confirmed by a specific section of the EnCLASS survey (National Adolescent Health and Substance Use Survey in Middle and High Schools) carried out in the first quarter of 2021 among pupils in the ninth grade: lifetime cigarette use fell by almost 23 points in eleven years (29.1% vs 51.8% in 2010).

Before the age of 14, daily cigarette use remained rare, but its use increased significantly thereafter. The EnCLASS ninth-grade survey conducted in 2021 measured a fourfold decrease in the share of daily cigarette smokers, from 15.6% in 2010 to 3.7% in 2021.

In 2018, lifetime cigarette use beginning in middle school became more widespread in high school, rising from 46.6% of initiates in tenth grade to 60.1% in twelfth grade. Daily use concerns 17.5% of high school students, again with a continuous increase between tenth grade (14.0%) and twelfth grade (21.5%).

In comparison with other European countries

The international surveys Health Behaviour in School-Aged Children (HBSC), and the European School Survey Project on Alcohol and other Drugs (ESPAD) enable France to be compared with most other European countries for children aged 11, 13, 15 and 16. Among the latter, daily smoking notably halved over 20 years, from 31% in 1999 to 12% in 2019. This steady decline in cigarette use has been part of a major trend in Europe. This decrease in smoking was the most remarkable development in the use of psychoactive substances observed among adolescents over the last quarter of a century. 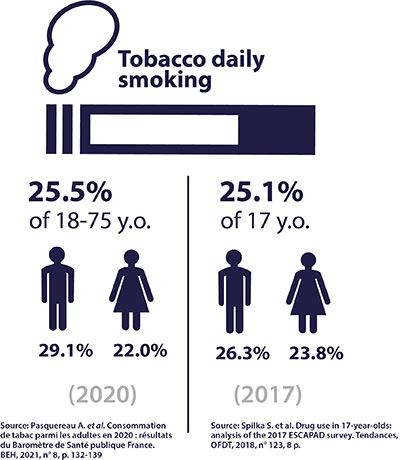 In the adult population 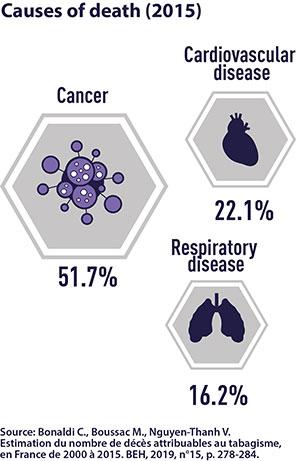 All the components of tobacco have a particular impact on:

- respiratory function: smokers expose themselves to disorders of the entire respiratory system, including the risk of chronic bronchitis and the risk of lung cancer;
- digestive function: nicotine increases the secretion of gastric acids.

Smoking limits the supply of oxygen to the brain and muscles. It is responsible for headaches, dizziness and reduced resistance to exercise. Dependence is confirmed in most smokers, with a feeling of withdrawal on stopping (tension, nervousness, irritability, anxiety and even depression).

In 2015, the annual number of deaths attributable to smoking was estimated to be around 75 000 (mainly from cancer). Between 2000 and 2015, the share of attributable deaths appeared to be decreasing over time for men, while the same proportion for women was continuously increasing by more than 5% per year on average.

Smoking cessation with the help of a health care professional is most often carried out as part of general practice. The issue of smoking treatment can also be observed from the sales figures for treatments to help people stop smoking (nicotine substitutes in the form of transdermal patches or in oral form, Zyban® and Champix®). Sales have risen sharply in recent years due to the fact that they are no longer reimbursed on a flat-rate basis but under a common law regime, as of 1 January 2019. This extension has also been accompanied by an increase in the profession that can prescribe these treatments. Since 1 January 2016, nurses, masseur-physiotherapists, midwives, dental surgeons and occupational physicians have been able to prescribe nicotine substitutes. In 2021, sales of smoking cessation treatments in pharmacies increased by 14.4% compared to 2020 (7 030 284 sales in month equivalents of treatment). This is in line with the upward trend in attempts to quit for at least one week in recent years. This concerned 30% of daily smokers in 2020, a proportion that was lower than in 2019 (33%), but which remained higher than in previous years (around 25% between 2016 and 2018).

Perception of the dangerousness of the product

According to the EROPP (Survey on representations, opinions and perceptions regarding psychoactive drugs), a third of French people (34%) considered that tobacco is dangerous from the moment of first use in 2018. After doubling between 1999 and 2012, this proportion has stalled since 2012 (41%). It was at the stage of daily use that tobacco appears most dangerous for 51% of French people (compared to 47% in 2012).

In 2017, more than nine out of 10 17-year-olds (95%) agreed that smoking was dangerous and a further nine out of 10 (93%) agreed that those who smoked a pack or more were at significant risk. Only 8% of these young people thought that occasional smoking could pose a significant risk. The qualitative survey on Attitudes, Representations, Aspirations and Motivations during Initiation to Psychoactive Substances (ARAMIS) showed that the image of tobacco was resolutely negative and that it was strongly disapproved of by all the minors interviewed, who have spent their childhood and adolescence under a legal regime prohibiting smoking in all public places.

In view of the proven health risks of tobacco, the promotion and sale of tobacco and its use in public places are regulated:

- Internationally: in 2003, the European Union, along with 25 of its Member States, including France, signed the World Health Organisation (WHO) Framework Convention on Tobacco Control (FCTC) of 21 May 2003, the first international health treaty. The text provides a framework for increasingly stringent tobacco control measures.

- At the national level: the various measures taken in France have been progressively deployed by decree and through various national plans: Cancer plans (2003-2007; 2009-2013; 2014-2019; plus a ten-year strategy from 2021 to 2019; the National Tobacco Reduction Plan (PNRT) (2014 to 2019) and the National Tobacco Control Programme (PNLT) from 2018 to 2022. The measures are based on a number of key areas, such as a general ban on smoking in public places, protection of minors, restriction of manufacturing and trading rules and treatment/prevention.

The electronic cigarette, also known as an e-cigarette, reproduces the sensation of a traditional tobacco cigarette. An electronic cigarette consists of a battery, an atomiser and a cartridge filled with a liquid (e-liquid). The latter contains various aromatic substances (tobacco, mint, apple, etc.), together with propylene glycol and/or vegetable glycerine, additives and, depending on the bottle, nicotine in different concentrations. During inhalation, the liquid, mixed with the air breathed in, is diffused as a vapour, similar to the smoke of a traditional cigarette, and then inhaled by the user. As it does not burn, it does not give off the carcinogenic substances contained in cigarette smoke, nor does it give off carbon monoxide or tar, but there is still a lack of information on the long-term effects of the use of electronic cigarettes. Its less dangerous nature compared to tobacco cigarettes has now been widely demonstrated, but its usefulness in helping people to stop smoking has yet to be proven by large-scale clinical studies. Furthermore, the risk of transition from electronic cigarettes to smoking in the adolescent population is currently under debate, as studies on this point are divergent.

The use of electronic cigarettes

In 2017, 52.4% of 17-year-olds surveyed said they had used an e-cigarette before in their lifetime (56.5% of boys and 48.1% of girls), only slightly less than in 2014 (53.3%). But the use of electronic cigarettes remained essentially occasional: 34.9% of lifetime users were satisfied with a single use and fewer adolescents reported vaping within the past month or daily vaping than in 2014 (respectively 16.8% vs 22.1% and 1.9% vs 2.5%). The proximity of e-cigarette and tobacco use was significant: only 4.0% of e-cigarette lifetime users said that they had never tried smoking tobacco, and the vast majority of daily vapers also said that they were daily cigarette smokers (68.3%).

The legal framework of the electronic cigarette

Vaping products (i.e. the electronic cigarette itself but also its components, refills or liquids) are subject to a legal framework close to that in force for smoking tobacco products, in particular since the transposition of the European Directive 2014/40/EU on tobacco products. The latter includes health warnings. Advertising or propaganda (including sponsorship and patronage) and sales to minors are prohibited. Smoking is prohibited in schools or establishments intended for minors, closed public transport and covered public workplaces.