Opiates (opium, morphine, codeine) are natural derivatives of the poppy plant, whereas opioids are semi-synthetic (heroin, buprenorphine) or synthetic (fentanyl) compounds, which have much more powerful analgesic properties. The term “opioids” now tends to refer to all substances whether they are of natural or synthetic origin. One of their major characteristics is their ability to induce psychological and physical dependence.

Heroin comes as a white (acidic salt) or brown (basic salt) powder and can be injected intravenously, snorted or smoked. The pharmacological properties of heroin, a sedative substance, are comparable to those of morphine, but it acts faster, more intensely and for a shorter time.

Since 2018, the quantities of heroin seized in France have exceeded one tonne, which is a high level compared to previous years. In 2021, they reached an unprecedented level of 1.3 tonnes.

Most of the heroin used in France comes from Afghanistan (brown heroin) and is transited via Iran by the Balkan route (Turkey, Greece, Albania). 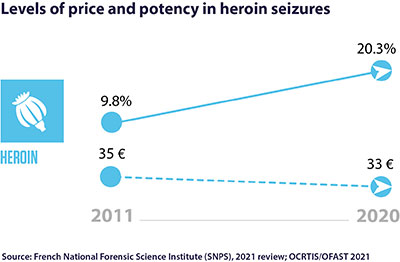 In 2021, the current retail price of a gram of brown heroin was €33. In 2020, the average content of heroin seized in France, at 20.3%, was the highest measured for ten years according to the scientific police department (SNPS). The heroin sold frequently contains cutting agents, the most common being paracetamol and caffeine.

The strength of the heroin market in France is strongly determined by its proximity to the Netherlands and Belgium, which are two major heroin storage and redistribution countries in Western Europe. It is therefore highly regionalised, with a large availability of the product in the north-north-east of France, fuelled by the intensity of cross-border traffic, and a smaller presence in the south. The most striking changes in recent years in terms of heroin supply have come from the Lyon region, with the emergence in recent years of new Albanian-speaking players.

Since the introduction of substitution treatments in France in 1995, non-therapeutic uses of buprenorphine, methadone and also morphine sulphates have developed.

Rare use in the adolescent and general population

A diversification of uses among drug users

Opioids play an important role in the use of active drug users: in 2019, 73% of those admitted to the CAARUD (harm reduction facilities) used at least one opioid in the past month. However, unlike the situation in the 1980s, this type of substance, and in particular heroin, no longer constitutes the bulk of the products used, but is now part of the range of substances used as part of polydrug use. Thus, among CAARUD users, 8.5% said that they used heroin on a daily basis.

The use of methadone (therapeutic or not) has continued to increase in this population, to the detriment of buprenorphine. This is partly explained by the fact that the prescription of this molecule as part of opioid substitution treatment (OST) has increased. According to the survey conducted in CAARUDs in 2019, methadone was the most commonly used opioid in the month preceding the survey, ahead of buprenorphine (48%). It was used daily in three out of four cases (75%). Morphine sulphate use concerned 32% of respondents.

Clinical approach: the effects of heroin or other opioid use

Heroin use results in a feeling of calm and relaxation within a very short time, accompanied by a feeling of euphoria. The main side effects of its use are drowsiness, slowed breathing rate, constipation, sometimes nausea, vomiting and dizziness.

With repeated use, tolerance to the product develops: the pleasure derived from a dose becomes less and less significant, and the absence of use leads to an increasingly intense state of withdrawal. The user then seeks to increase the frequency and doses to compensate for this state of withdrawal and regain the sensations felt the first times they used it.

Taking too much heroin or other opioids (overdose) causes respiratory depression, which is often fatal. The risk is further increased when the use of this substance is combined with alcohol or benzodiazepines.

Injection drug use exposes people to abscesses and risks of contamination by HIV, HCV and HBV.

Opioids are very often the reason for treatment...

In terms of people treated in specialised drug treatment centres (CSAPAs) for illicit drugs other than cannabis, the dominant profile is that of multiple opioid users (8 out of 10 people), even though it decreased between 2015 and 2019 (-5%). The composition of this group has changed little since 2015. This is a population whose average age increased from 37.5 years in 2015 to 39.4 years in 2019. The number of people treated with opioid substitution drugs, which had been rising steadily since their introduction in 1995, tended to stabilise at around 180 000 in 2017. Of these, 162 000 were dispensed in pharmacies (87% of which were prescribed by private practitioners, almost exclusively general practitioners) and 23 000 in CSAPAs. The population reimbursed for these treatments, three quarters of whom were male and 40.5 years old on average, aged more than 4 years between 2011 and 2017. Treatment with buprenorphine remains the most common. Its use in 2017 was almost twice as high as that of methadone. However, the share of methadone in the total consumption of opioid substitution treatments has increased steadily since 1998.

Opioids are strongly implicated (alone or in combination) in overdose deaths, the number of which has increased significantly in recent years. Of the 503 overdose deaths documented in 2019 by the DRAMES scheme (Drug and substance abuse-related deaths), the presence of opioids was stable and concerned 77% of fatal overdoses. Methadone has been the leading drug for several years (35% of cases in 2019), ahead of heroin (22%). The remaining cases of overdose were divided between opioid analgesics - mainly morphine - (10%) and buprenorphine (9%).

In 2018, 84% of French people aged 15 to 75 considered heroin to be a dangerous drug, just ahead of cocaine but well above cannabis, tobacco and alcohol. The proportion of people who held this view fell slightly since 1999. As with other (especially licit) products, opinions about heroin and its users hardened in recent years. For example, 84% of French people believed that heroin users were dangerous to those around them. In contrast, the perception of users as ‘suffering from an illness’ rose sharply from 19% in 2012 to 56% in 2018.

Heroin is a classified drug and its use is prohibited. Buying, using, possessing, giving away, dealing, producing, transporting or driving after using heroin are all offences against the law and are subject to severe penalties in court, regardless of the amount of product involved.
The law of 31 December 1970, which punishes the use of and trafficking in narcotics, was strongly inspired by the health situation of heroin addicts: it provides for health alternatives to criminal prosecution, in particular the therapeutic injunction, which the judge can order for a user who is recognised as being addicted rather than prosecuting the user.
As with other illicit drugs, heroin trafficking is severely penalised. Penalties have become harsher since the late 1980s: they can go up to life imprisonment and a fine of €7.5 million for the most organised forms of trafficking.

On 26 January 2016, the law on the modernisation of the health system adopted two major provisions in the field of addictions: the trial of drug consumption rooms for a maximum of six years (currently, two rooms exist in Paris and Strasbourg) and the extension of the practice of rapid diagnostic tests (RDT) to the staff of prevention structures or associations who have received appropriate training.

In view of the positive results of the evaluation conducted by Inserm, the trial of drug consumption rooms has been renewed under the name of Haltes Soins Addictions (HAS in French). The Social Security Financing Act 2022 enshrines this name.

In 2016, a programme was also set up to distribute naloxone (antidote to opioid overdoses) to drug users in France: two specialities are currently marketed, the Nalscue® nasal naloxone kit available since July 2016 and the Prenoxad® intramuscular naloxone kit marketed since June 2019. These kits are distributed in specialised structures (CSAPA, CAARUD) and in health care institutions. Prenoxad® is also available in pharmacies.