Cocaine (or cocaine hydrochloride) is an alkaloid extracted from the coca leaf. A powerful central nervous system stimulant, this molecule acts on the dopaminergic, serotonergic and adrenergic systems. It comes in the form of a white powder, most often consumed through the nose (snorting), sometimes through the lungs (inhaling smoke or vapours orally or nasally) or intravenously (injection).

Cocaine base, which circulates under the name “crack” or “free base cocaine”, is a derivative of cocaine hydrochloride, resulting from the addition of bicarbonate or ammonia. This transformation allows the powder to crystallise into small rocks, which are then smoked and, more rarely, injected. The effects of cocaine base are much stronger than those of cocaine hydrochloride. Their onset is faster (1-2 minutes compared to 15-30 minutes), but their duration is much shorter (10-15 minutes compared to about an hour), which leads users to take them more often. 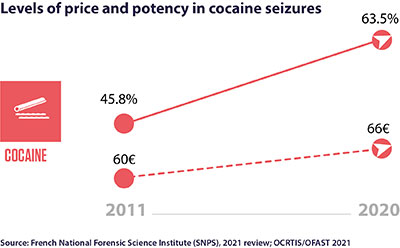 A very clear increase in the purity of cocaine has been observed over the last ten years, with the average rate observed on French territory by the scientific police department (SNPS) currently reaching 63.5% vs 45.8% in 2011. The cocaine sold frequently contains cutting agents that also have psychoactive effects (levamisole, paracetamol, caffeine, hydroxyzine, lidocaine).

The price of a gram of cocaine hydrochloride has been falling steadily since 2018. The going price fell from €70 per gram to €66 according to the French Anti-Narcotics Office (OFAST). The accessibility of cocaine has been facilitated by fractional sales (by the half-gram at €30 or €40 or for small sums: sachets or “pochons” are sold for €15 or 20).

The price of a crack cocaine “wafer” (which can allow 3 to 5 uses) varies between €10 and €20. The cocaine sold and already free based (crack) is used exclusively in the Paris region and in the French West Indies. In metropolitan France, crack cocaine is sold in Paris in the north-east of the capital and in Seine-Saint-Denis.

Increasingly rare use in the general population

Cocaine, in its hydrochloride form, is the most widely used illicit product in France after cannabis: the number of lifetime cocaine users in France among 11–75-year-olds was estimated at 2.1 million people in 2017. The share of 18-64-year-olds who had used cocaine before quadrupled in two decades (from 1.2% in 1995 to 5.6% in 2017).

Use during the past year was reported by 600 000 people. Both current use (use in the last year) and lifetime use were still two to three times more common among men than women. Use over the course of the last year was highest among 18-25-year-olds (2.8%) and 26-34-year-olds (3.4%), and then declined and disappeared after age 55.

Cocaine and crack cocaine use, whether occasional or chronic, can have an impact on users’ physical and mental health. These consequences can occur regardless of the route of administration, amount and frequency of use.
In terms of effects, cocaine is often described as a disinhibitor that induces feelings of omnipotence and hyperactivity. The effects described are also an increase in emotions as well as excitement and a feeling of euphoria. The effects sought by users also include a sense of achievement and enjoyment.
The somatic complications most often encountered are cardiac or neurological (stroke, convulsions, etc.). Pulmonary complications occur almost exclusively among crack cocaine users, due to the method of use (vapour inhalation).
Snorting cocaine causes damage to the nasal septum, sometimes rapidly in the case of heavy use, and can also cause oral anaesthesia. Finally, the risky practices associated with injecting and sharing equipment (straws for cocaine, pipes for crack) can cause bacterial infections (local skin abscesses, septicaemia) or viral infections (HIV, HBV and especially HCV).
In addition, in the hours following cocaine use, outbreaks of paranoia, anxiety, aggression and violence may appear, sometimes associated with auditory, visual and sensory hallucinations. Cocaine-induced paranoia can be accompanied by a compulsive drug-seeking syndrome, especially among crack cocaine users.
Cocaine does not cause physical dependence, but it does generate a strong psychological dependence.

Cocaine-related deaths on the rise

Perception in the general population

According to EROPP, the survey on representations, opinions and perceptions regarding psychoactive drugs, more than three-quarters of French people (76%) aged between 15 and 75 considered cocaine to be a dangerous drug from the moment of first use, second only to heroin. The proportion of people who hold this view fell for the first time since 1999 (85% in 2013). Despite the widespread use of this drug among the population and the fairly positive image it still enjoys in some circles, opinions about it, like other products (especially licit ones), have hardened in recent years. Thus, 82% of French people believe that cocaine users are dangerous for those around them and many refuse to exonerate them from their share of responsibility, on the pretext of an illness or difficult family history.

Cocaine, whether snorted or smoked, in powder (cocaine hydrochloride) or base (crack, free base cocaine) form, is a classified drug and its use is prohibited. Buying, using, possessing, giving away, dealing, producing, transporting or driving after using cocaine are all offences against the law and are subject to severe penalties in court, regardless of the amount of product involved.
The law provides for the repression of trafficking and profits from trafficking, which has been reinforced by some thirty laws since the late 1990s. Penalties have been increased to life imprisonment for certain drug trafficking offences and high fines (up to €7.5 million for the production, manufacture, import, transport or sale of drugs).