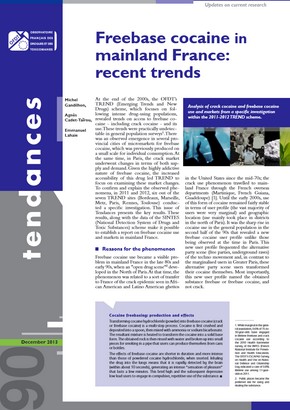 At the end of the 2000s, the OFDT’s TREND (Emerging Trends and New Drugs) scheme, which focuses on following intense drug-using populations, revealed trends on access to freebase cocaine - including crack cocaine - and its use. These trends were practically undetectable in general population surveys. There was an observed emergence in several provincial cities of micromarkets for freebase cocaine, which was previously produced on a small scale for individual consumption. At the same time, in Paris, the crack market underwent changes in terms of both supply and demand. Given the highly addictive nature of freebase cocaine, the increased accessibility of this drug led TREND to focus on examining these market changes. To confirm and explain the observed phenomena, in 2011 and 2012, six out of the seven TREND sites (Bordeaux, Marseille, Metz, Paris, Rennes, Toulouse) conducted a specific investigation. This issue of Tendances presents the key results. These results, along with the data of the SINTES (National Detection System of Drugs and Toxic Substances) scheme make it possible to establish a report on freebase cocaine use and markets in mainland France.