Alcohol, tobacco and cannabis use during the "lycée years" 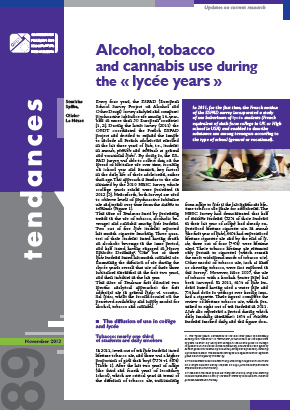 Every four years, the ESPAD (European School Survey Project on Alcohol and Other Drugs) survey analyses and compares psychoactive substance use among 16-yearolds in more than 30 European countries. During the latest survey (2011) the OFDT coordinated the French ESPAD project and decided to expand the sample to include all French adolescents enrolled in the last three years of lycée, i.e., students in seconde, première and terminale at general and vocational lycées. This approach is similar to the one initiated by the 2010 HBSC survey, whose «collège years» results were presented in 2012.

Two out of five lycée students reported last month cigarette smoking. Three quarters of these students stated having drunk an alcoholic beverage in the same period, and half stated having engaged in Heavy Episodic Drinking. One out of three lycée students stated last month cannabis use. Examining the diffusion of use during the «lycée years» reveals that use of these three substances intensifies in the first two years, and then stabilises in the last year.