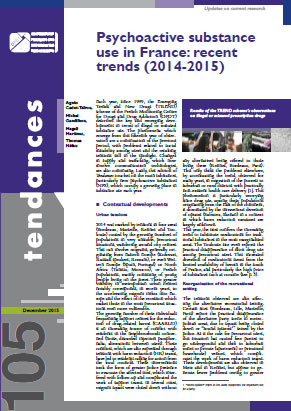 Each year, since 1999, the Emerging Trends and New Drugs (TREND) scheme of the French Monitoring Centre for Drugs and Drug Addiction (OFDT) describes the key and emerging developments in terms of illegal or misused substance use relying on local sites. The phenomena which emerge from this fifteenth year of observation are a continuation of the previous period, with problems related to social instability among users and the resulting tensions still in the spotlight. Changes in supply and trafficking, which now involve communication technologies, are also continuing. Lastly, this edition of Tendances touches on the main substances, particularly new psychoactive substances (NPS), which occupy a growing place in substance use each year.

- 2014 was marked by tensions in several areas caused by the growing numbers of populations in very unstable, precarious situations, wandering around city centres. This year, the sites confirm the increasing trend to substitute medications for traditional substances in the most marginalised areas.

- Certain sites report the practical disappearance of the alternative party scene in metropolitan areas. The second sociological development is related to the increasing diversity of the public frequenting "alternative" party events who do not display any special interest in the music or the techno counter-culture: they are solely attracted by the prospect of taking substances such as MDMA and cocaine.

- There have been several developments in drug supply in France in recent years: adaptation among dealers following the creation of priority safety zones, from 2012 onwards, the increasingly mobile nature of trafficking based on mobile phone use, and the emergence of purchasing on the deep web, hand in hand with an incessantly growing supply of substances on the Internet.

- According to all available sources, a large proportion of NPS use remains focused on cathinone stimulants or one piperidine (ethylphenidate). Observation of NPS circulation, fairly clearly suggests that the legal status of substances is of little interest to NPS users. The organisation of different user populations, in concentric circles around a core of expert psychonauts is confirmed.

- 2014 confirms the re-emergence of MDMA/ecstasy tablets on the different party scenes, whether the commercial dance-event setting (clubs, discotheques) or alternative recreational setting. This re-emergence goes hand in hand with a genuine marketing strategy by producers with larger, more potent, colourful and 3D tablets.

- The observers report that herbal cannabis is sometimes sourced more easily than cannabis resin. The strong rise in THC levels raises questions as to the risks arising from such highly potent products, as some sites report an increase in emergency visits.

- The availability of cocaine is still high, driven by the growing diversity in access to the substance, from the Internet, to the trafficking in housing estates, through to micro-networks of user-dealers.

- The opiate situation in France is still characterised by a major cut-off between northern/eastern France where heroin is widely available, and the south where it is still barely visible or accessible. Small-scale trafficking of buprenorphine (Subutex), methadone, or morphine sulphate (Skenan) destined for precarious users is still very present at all sites.