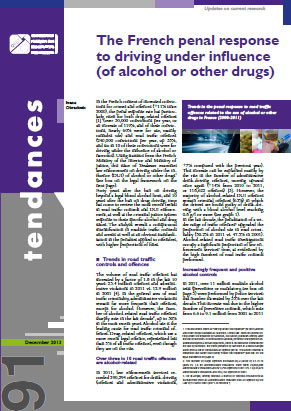 In the French context of increased convictions for crimes and offences (+11% since 2000), the penal response rate has particularly risen for both drug-related offences (over 50,000 convictions per year, or an increase of 119%, and of these convictions, nearly 60% were for use, mainly cannabis use) and road traffic offences (240,000 convictions per year, up 35%, and six in 10 of these convictions were for driving under the influence of alcohol or narcotics). This issue of Tendances examines law enforcement on driving under the influence of alcohol or other drugs, reviewing the most recent trends in road traffic controls and driving under the influence enforcement, as well as the criminal justice system response to these specific alcohol and drug issues. The analysis reveals a conspicuous intensification in roadside traffic controls and arrests as well as an obvious standardisation in the penalties applied to offenders, with higher proportions of fines.