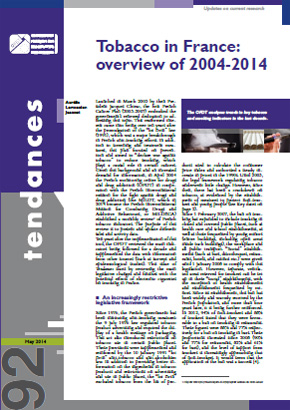 Launched in March 2003 by then President Jacques Chirac, the first French Cancer Plan (2003-2007) embodied the government’s renewed dedication to addressing this topic. This reaffirmed interest came into being over ten years after the promulgation of the “loi Evin” law (1991), which was a major breakthrough in French anti-smoking efforts. In addition to screening and treatment measures, this plan focused on prevention and aimed to “declare war against tobacco” to reduce smoking, which plays a causal role in certain cancers. Given this background and an increased demand for information, in April 2004 the French monitoring centre for drugs and drug addiction (OFDT) in cooperation with the French Interministerial mission for the fight against drugs and drug addiction (the MILDT, which in 2014 became the French Interministerial Mission for Combating Drugs and Addictive Behaviours, or MILDECA) established a monthly review1 of French tobacco indicators. The purpose of this review is to present and update different sales and activity data. Ten years after the implementation of this tool, the OFDT reviewed the main indicators being followed for a decade and supplemented the data with information from other sources (such as surveys and epidemiological studies). This issue of Tendances starts by reviewing the main legislative changes and finishes with the potential effects of electronic cigarettes on smoking in France.