Tobacco in high schools: the main changes observed from 2002 to 2006 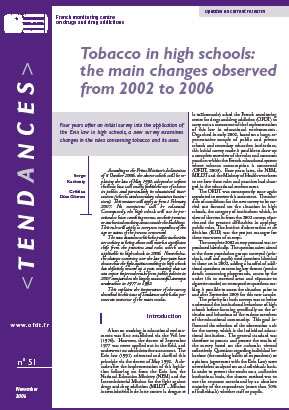 Four years after an initial survey into the application of the Evin law in high schools, a new survey examines changes in the rules concerning tobacco and its uses.
According to the Prime Minister's declarations of 8 October 2006, the decree which will be replacing the law of May 1992, adopted to enforce the Evin law, will totally forbid the use of tobacco in public, and particularly in educational institutions (schools, and secondary education institutions). This measure will apply as from 1 February 2007. No exceptions will be tolerated. Consequently, the high schools will not be permitted to have "smoking rooms" on their premises or authorised smoking areas outside the buildings. This rule will apply to everyone, regardless of the age or status of the persons concerned.
The new situation which the public authorities are seeking to bring about will mark a significant shift from the practices and rules which were applicable in high schools in 2006. Nevertheless, the changes occurring over the last four years have shown that the fight against smoking in high schools has definitely moved up a gear, meaning that we can expect improved results from public policies in 2007 compared to the largely unsuccessful attempts undertaken in 1977 or 1992.
This explains the importance of the survey described in this issue of Tendances which also presents an overview of the main results.