The seventh national report on the TREND system 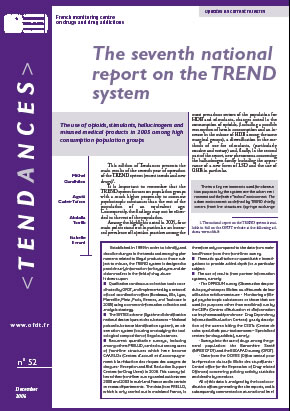 This edition of Tendances presents the main results of the seventh year of operation of the TREND system (recent trends and new drugs).
It is important to remember that the TREND system focuses on population groups with a much higher propensity to consume psychotropic substances than the rest of the population of an equivalent age. Consequently, the findings may not be extended to the rest of the population.
Among the highlights noted in 2005, four main points stand out in particular: an increased prevalence of injection practices among the most precarious sectors of the population for HDB and stimulants, changes noted in the consumption of opioids, (including a possible resumption of heroin consumption and an increase in the misuse of HDB among the same marginal groups), a diversification in the methods of use for stimulants, (particularly cocaine and ecstasy) and, finally, in the second part of the report, new phenomena concerning the hallucinogen family including the appearance of a new form of LSD and the use of GHB in particular.