The problem use of cocaine : An overview of the needs expressed and the responses offered 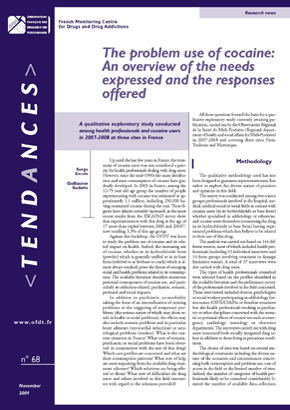 Up until the last few years in France, the treatment of cocaine users was not considered a priority for health professionals dealing with drug users. However, since the mid-1990s the mass distribution and mass consumption of cocaine have gradually developed. In 2005 in France, among the 12-75 year old age group the number of people experimenting with cocaine was estimated at approximately 1.1 million, including 250,000 having consumed cocaine during the year. These figures have almost certainly increased, as the most recent results from the ESCAPAD survey show that experimentation with this drug at the age of 17 more than tripled between 2000 and 2008?, now totalling 3.3% of this age group.
Against this backdrop, the OFDT was keen to study the problem use of cocaine and its related impact on health. Indeed, the increasing use of cocaine, whether in its hydrochloride form (powder) which is generally sniffed or in its base form (referred to as freebase or crack) which is almost always smoked, poses the threat of emerging social and health problems related to its consumption. The available literature describes numerous potential consequences of cocaine use, and particularly its addiction-related, psychiatric, somatic, perinatal and social impacts.