New psychoactive substances and the Internet: current situations and issues 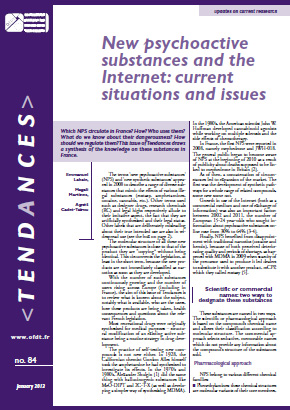 The terms 'new psychoactive substances' (NPS) and 'new synthetic substances' appeared in 2008 to describe a range of diverse substances that mimic the effects of various illegal substances (ecstasy, amphetamines, cocaine, cannabis, etc.). Other terms used such as designer drugs, research chemicals (RC) and legal highs respectively allude to their imitative aspect, the fact that they are artificially synthesised and their legal status.

The molecular structure of all these new psychoactive substances is close to that of the product they are "copying" without being identical. This circumvents the legislation, at least in the short term, because the new products are not immediately classified as narcotics as soon as they are developed.

With the number of such substances continuously growing and the number of users rising across Europe (including in France), the aim of this issue of Tendances is to review what is known about the subject, notably what is available, who are the users, how these products are being taken, health consequences and questions about the relevant French legislation.