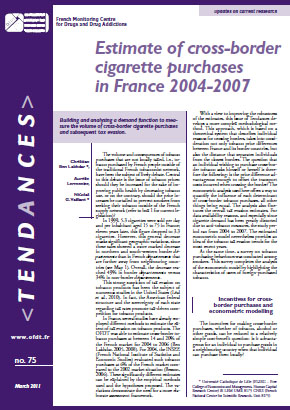 The volume and consequences of tobacco purchases that are not locally taxed, i.e., tobacco purchased by French people outside of the traditional French tobacconist network, have been the subject of lively debate. In France, several studies have already employed different methods to estimate the extent of tax evasion on tobacco products.

With a view to improving the robustness of the estimates, this issue of Tendances develops an approach which is based on a theoretical system that describes individual reasons for crossing borders, takes into consideration not only tobacco price differences between France and its border countries, but also the distance that separates individuals from the closest borders. The econometric analysis used here offers a way to quantify the influence of each determinant of cross-border tobacco purchases, all other things being equal. The analysis also finetunes the overall tax evasion estimates. For data availability reasons, and especially since cigarette demand has been greatly distorted due to anti-tobacco measures, the study period ran from 2004 to 2007. The estimated econometric model nevertheless provides an idea of the tobacco tax evasion trends for the most recent years.

At the same time, a survey on tobacco purchasing behaviours was conducted among smokers. This survey completes the analysis of the econometric model by highlighting the characteristics of users of foreign-purchased tobacco.