Drug use among 17-year-olds: initial results of the ESCAPAD 2011 survey 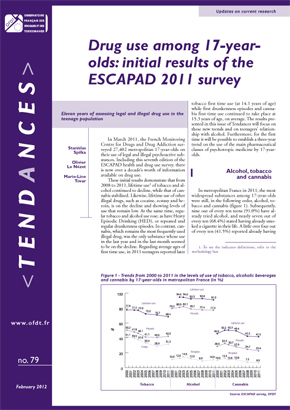 In March 2011, the French Monitoring Centre for Drugs and Drug Addiction surveyed 27,402 metropolitan 17-year-olds on their use of legal and illegal psychoactive substances. Including this seventh edition of the ESCAPAD health and drug use survey, there is now over a decade’s worth of information available on drug use.

These initial results demonstrate that from 2008 to 2011, lifetime use1 of tobacco and alcohol continued to decline, while that of cannabis stabilised. Likewise, lifetime use of other illegal drugs, such as cocaine, ecstasy and heroin, is on the decline and showing levels of use that remain low. At the same time, regular tobacco and alcohol use rose, as have Heavy Episodic Drinking (HED), or repeated and regular drunkenness episodes. In contrast, cannabis, which remains the most frequently used illegal drug, was the only substance whose use in the last year and in the last month seemed to be on the decline. Regarding average ages of first time use, in 2011 teenagers reported later tobacco first time use (at 14.1 years of age) while first drunkenness episodes and cannabis first time use continued to take place at 15.3 years of age, on average. The results presented in this issue of Tendances will focus on these new trends and on teenagers’ relationship with alcohol. Furthermore, for the first time it will be possible to establish a three-year trend on the use of the main pharmaceutical classes of psychotropic medicine by 17-year-olds.