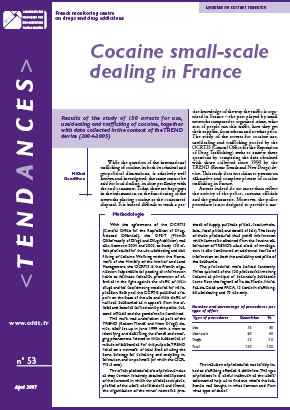 While the question of the international trafficking of cocaine, in both its criminal and geopolitical dimensions, is relatively well known and investigated, the same cannot be said for local dealing, in close proximity with the end-consumer. Today, there are large gaps in the information on the functioning of the networks placing cocaine at the consumers' disposal. It is indeed difficult to reach a precise knowledge of the way the traffic is organised in France - the part played by small networks compared to organised crime, what sort of people run this traffic, how they get their supplies, from whom and at what price. The study of the arrests for cocaine use, use/dealing and trafficking pooled by the OCRTIS (Central Office for the Repression of Drug Trafficking) seeks to answer these questions by comparing the data obtained with those collected since 1999 by the TREND (Recent Trends and New Drugs) device. This study does not claim to present an exhaustive and complete picture of cocaine trafficking in France.

Arrests indeed do no more than reflect the activity of the police, customs officials and the gendarmerie. Moreover, the police procedure is not designed to provide a narrative account of the offence but rather to give a legal form to facts and to police action. In addition, the populations concerned by these arrests are often the most vulnerable inasmuch as they are the least organised and professional in drug use and dealing. Lastly, the quality of the information contained in the procedures tends to vary depending on how highly organised the trafficking is. The more sophisticated the organisation, and the more professional the persons involved, the scarcer the information, the law of silence and dissimulation being most often the rule, (not to mention that in this case the procedure itself sheds light only on a small part of the events). In marked contrast, procedures involving the small networks, made up of amateurs, novices or semi-professionals, very often prove to be full of information.