Changes in the cannabis market in France
Summary 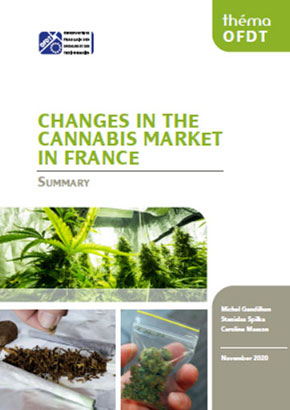 This report from the issue of Théma published by the OFDT in July 2019 is devoted to the changes in the cannabis market in France, particularly in relation to the increase in the use of herbal cannabis. These changes are taking place against a background of a significant increase in cannabis consumption over the last twenty years. Indeed, France is one of the countries in Europe with the highest consumption, especially in the youngest age groups. According to the latest available data (2017), 45% of 18-64-year olds and 39% of 17-year olds have experimented with the substance. In total, in 2017, there were 5 million users in the last year. Cannabis, the most commonly used illicit product, has tended to become normalised in public opinion. In 2018, 40% of those surveyed were in favour of people growing cannabis in small quantities for personal consumption. Almost two-thirds (63%) of those who have experimented with the substance have done so. The international context, marked since the 2010s by the progression of the legalisation of its use for medical and nonmedical purposes, particularly in North and South America (Canada, Uruguay, United States), is likely to influence public perception, especially among those who have experimented with the product.

For this report on the state of play of market transformations, a set of qualitative and quantitative sources have been used to describe the changes at work. First of all, the data comes from the OFDT's multisite observation scheme (TREND-SINTES) but also from statistical surveys conducted by and with the OFDT among young people (ESCAPAD, ESPAD) or adults (Health Barometer of the National Public Health Agency). The data provided by OCRTIS (Central Office for the Repression of Drug-Related Offences), now OFAST (Home Affairs Department’s Anti-Narcotics Office), at the beginning of 2020 on the organisation of seizures of cannabis plantations and products, has also been used. Finally, this analysis drew on the reports from the European Monitoring Centre for Drugs and Drug Addiction (EMCDDA) and the United Nations Office on Drugs and Crime (UNODC) to place the information in an international context.

Read the complete report in French

These and other questions are explored in the 2020 European Drug Report, our annual overview of the drug situation in Europe.