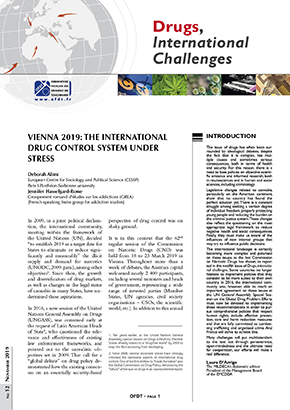 The international landscape is becoming more complex and polarised on legislative drug issues, as the last Commission on Narcotic Drugs (CND) has shown. The 62nd regular session of the CND was held from 18 to 23 March 2019 in Vienna. Throughout more than a week of debates, the Austrian capital welcomed nearly 2 400 participants, including several ministers and heads of government, representing a wide range of invested parties (Member States, UN agencies, civil society organisations, the scientific world, etc.). In addition to this annual session, a special "ministerial segment" was added on 14 and 15 March to take stock of the efforts made over the last ten years to "address and combat the world drug problem".

This issue of Drugs, international challenges breaks down these 10 days of debates, offering a detailed analysis of the issues and developments that will shape the next years of international drug policy.